Leaving Acton Town Underground station, we turn right on to Gunnersbury Lane, and again on to the tautologically named Avenue Road. The word residential comes to mind here, not in the literal sense that people simply live in this place, but with its connotations of middle-class comfort. It’s a long street of low (I’m guessing) Georgian or Edwardian terraces, the houses elegant, wider than I’m used to, set back a little behind small front gardens. While the street is narrow, it doesn’t feel at all cramped or claustrophobic.

It turns out that we’re in Mill Hill Conservation Zone, which means you can’t really change anything about the built environment and pretty much need planning permission to put up an umbrella. There’s a small park, which adults without children are not permitted to enter. One of the gardens has a large olive tree, which my adventuring companion Marianthi says is still a strange sight even after two decades living in England. There’s a place describing itself as “Britain’s first internet nursery”, but it’s not clear whether their children log in from home and finger-paint with a touchscreen or they were just the first nursery to have a website.

A little further along the way the built environment changes markedly in character. Terraced and semi-detached housing gives way to high-density blocks dating from the 1960s, which would have been let by the local authority until the Thatcher government forced councils to sell off their social housing. Although Avenue Road continues into these estates, a barrier across the road prevents vehicles from passing directly into the ‘residential’ zone from the tower blocks.

There may be valid pragmatic reasons for this barrier, concerning traffic flow and such like, but given its position (and perhaps the connotations of the word barrier) it’s hard not to read into it a subtext of social segregation. 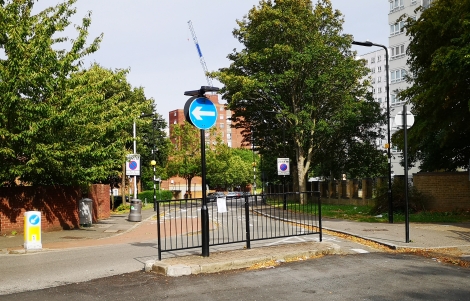 Like all boundaries, though, this one is not as clear-cut as it might seem. While there is a sharp discontinuity here in the built environment, the divide is bridged by trees. A visual constant of greenery spans the older and newer sections of housing. And for all the change in landscape, there is no shift in mood. This mellow Sunday afternoon the sense of calm that pervades the Conservation Zone carries through to the blocks of flats, across the boundary.

Seemingly concentric and chronological, successive layers of development comprise the south Acton estates – like rings through a tree trunk, in reverse order: high-rise blocks from the 1960s, low-rise from the decades after. At the centre of my journey lies Hope Gardens – a development just a couple of years old.

Last in, first out

Shelter is one of the primary requirements identified in Maslow’s hierarchy of needs, the famous taxonomy of human urges and fulfilment devised in the mid-20th century and still influential today. Many cultures have been built on nomadism or transhumance, but the ostensible permanence of a home forms part of the collective psychology of most societies. You can read it in the idioms of our language. Safe as houses, we say. Or at least we did before the sub-prime mortgage crisis.

As well as being the most recent section of housing to be built here, Hope Gardens will also be the first to be removed. Before it was erected, the land on which it stands was already earmarked for another development further down the line. In 2024 the converted shipping containers which house around 60 families on this site will be lifted out and something else built in their place.

Planners, developers and architects are starting to pay close attention to spaces of this nature, to explore their potential short-term uses, before they’re built on and become something different. Of course, the lifespan of many buildings turns out to be shorter than expected. But it’s unusual for ephemerality to be designed in to a housing development in this way. [1]

You can say Hope Gardens is designed to be temporary, but you might go a step further and say transience is its defining feature. The structure itself will only exist here in the short term, but within that limited timespan the residents, too, will necessarily come and go. Hope Gardens has been built specifically to provide temporary accommodation for people at risk of becoming homeless.

It’s a statutory duty of local authorities to house people in this situation, and usually it’s fulfilled through placements into hostels or cheap B&Bs. You wouldn’t want to presume about the experience of people who find themselves in this predicament, and nobody would come to live at Hope Gardens by choice. My impression today is only a glimpse. But for what little it’s worth, it’s mostly a positive one. 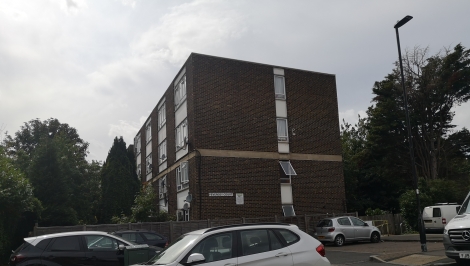 Pevensey Court, one of the low-rise structures adjacent to Hope Gardens

Looking at Hope Gardens in the context of its surrounding buildings, you see that the use of shipping containers as homes isn’t as far removed as you might think from some existing models of higher-density housing. Its materials are very different, but its shape and scale are not dissimilar to adjacent low-rise blocks like Pevensey Court.

Nor do the multiple scales of transience here appear to make the area anything out of the ordinary. On the streets surrounding Hope Gardens, children are kicking a football in a back yard, as children do. Hip-hop from the window of a passing Volkswagen plays at a respectful volume. A youngish white man is washing his navy blue Mercedes. A girl with east Asian sort of features cycles by, wearing a very correct helmet. Planes descend to Heathrow, chalking gentle diagonals into the air.

The meaning of permanence

When I read about Hope Gardens, its designed-in temporariness prompted me to think of it as a fundamentally different type of housing. Now that I’ve thought about it a little more, and seen it for myself, I wonder whether the difference between it and other homes may be one not of type but only of degree.

What lifespan do we normally expect of things that we build? Across Britain many structures like Corfe Tower and Harlech Tower here in the Acton estates, which went up in the two or three decades after the second world war, have already been pulled down. How long can the homes of Avenue Road and the Mill Hill Conservation Area last? Two centuries? Three? Is there a point beyond which we might stop wanting to conserve old buildings? Are there aspects of the built environment which we expect to outlast even housing? Transport infrastructure, perhaps, or war memorials. Do we genuinely suppose that even they will last forever? [2]

And if nothing is actually permanent, then what are our criteria for investing buildings with a sort of working definition of permanence? For that, perhaps we need only to anticipate that their lifespan will extend beyond our own.

I don’t mean to diminish the obvious and vast difference between the lived experience of owner-occupiers in comfortable homes and people living in Hope Gardens, or in insecure rented accommodation, or shanty towns, or the huddles of tents appearing in the waysides of British cities as homelessness continues to spiral. What I mean is that the built environment is inherently a scene of change, sometimes perhaps contrary to our expectations. That it’s as mutable as the natural landscape. The most significant variable is that of timescale. River deltas and Georgian terraces, glaciers and shop frontages, sand dunes and tower blocks, sea cliffs and telephone boxes slide in and out of the picture on parallax planes, like lower and higher layers of cloud.

This is interesting to me as a writer for a number of reasons. Changes in the built environment are a sort of defamiliarisation, compelling the inhabitant or passer-by to look again, in a way that’s analogous to the effects brought to bear on a reader by poetic form and literary devices. A city like Birmingham, where deletion and rebuild have become a sort of default state, is akin to an experimental text where techniques like cut and paste convey meaning in a metatextual way, by evoking a sense of disorientation or disruption.

A site or a landscape in flux can also be emblematic of, or metonymic for, the wider sense of precarity that has become the defining feature of life in Britain and elsewhere since the economic crash of the late 2000s. Anything we build now might be temporary: a café, a career, a women’s refuge, an identity. [3]

If a place like Hope Gardens has symbolic potential, then that potential must be used with care, with awareness of privilege and asymmetry, and with unvarying deference to the fact that way before this place is a metaphor, it’s where people live. I want to see Hope Gardens because I’m a place writer; my preoccupations are leading me here; and poetry should not and cannot exclusively be a sequence of relatably attractive pictures for successful people with permanent homes. But walking around this place must be an ethical negotiation, whose result is a settlement for the boundary of my gaze in a respectful place.

So for starters, of course, we don’t look into windows. But we see a window propped open with a wine bottle. We see children’s toys and laundry drying in the breeze. And we are reminded of the need that people everywhere have to make a shelter into a home.

[1] That said, as a form of short-term accommodation the shipping container is not without precedent. Parallels might be seen in official and unofficial forms such as shanties, caravans and portacabins.

[2] The temporary nature and design of digital locations, too, is noteworthy. Any website not redesigned in the last ten or perhaps even five years is noticeably dated; any longer than that and it will look as comically quaint as a chocolate-box cottage. Web pages and whole sites disappear every hour.

[3] If the temporary housing development is the domestic expression of post-recession insecurity then perhaps the pop-up shop, bar or café is its commercial equivalent. Better to fix the lifespan of our housing or business and close it down at a time of our choosing than leave it to the inevitable but unpredictable forces of economic turmoil.

A short book, a long poem, an impossible journey