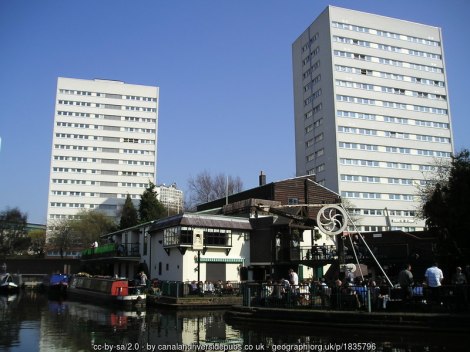 At the end of my freshman year – in those strange, indeterminate weeks of early summer after the end of teaching but before the students go back home – I found a pub overlooking one of the canal basins that sit below Birmingham city centre. I’d been looking for it since the previous autumn.

It had been an interesting first year. I couldn’t face halls of residence: instead I found two friends who shared my social maladroitness and co-rented a disused manse next to a Baptist church on the southern edge of Walsall. It was cold and damp. We did our laundry using an ancient twin-tub machine. Any kind of communication necessitated a walk to a payphone up the road. On a good day the journey down to campus, in the unlovely Perry Barr district of Birmingham, would take three quarters of an hour.

There were some challenges, then, but it wasn’t all bad. More often than I felt oppressed by the isolation, I felt intoxicated by it, perhaps convincing myself that it conferred a sort of deadbeat mystique. A family of foxes came to live in our garden. The pub on the corner of the road gave me a job, a bit of extra money, and an insight into Black Country dialect. I was starting to enjoy exploring. While my studies were introducing me to poststructuralist literary theory, the text I kept returning to was not The Death of The Author or Of Grammatology but the West Midlands A­­–Z.

What I wasn’t finding was much of an indie scene. Like every disaffected smalltown kid dashing off to the city, I was eager to find cool places and different people. For that first year I didn’t know where to look. One particularly fruitless Monday evening ended with a group of us in a bar themed like an American diner. It looked out over Smallbrook Queensway on the Birmingham inner ring road, and it was entirely desolate.

Then, just as the year was ending, I found myself at the Flapper,1 and I knew immediately that it was the place I’d been looking for.

Off the beaten track

You wandered off Broad Street – a glitzy thoroughfare of high-end clubs and bars packed with bawling men who wanted to flay you – and behind Symphony Hall, the Rep theatre, the convention centre and the place where they filmed Gladiators. You threaded between tower blocks of sold-off council flats and down a dim stone staircase to the canal. You took a right-angled concrete walkway above a yard with some benches, and there you were.

A long room with a pinball table at the near end and giant Jenga at the far. A lot of wood. Bare floorboards, tables, benches, stools, and huge barrels to perch over with a pint. Chip fat from the kitchen heavy in the air, permeating the timber. The bar to the right; a line of windows to the left, looking over the canal. Stairs down to a subterranean gig venue, sparse and dark, with brick arches that brought to mind those images of Liverpool’s Cavern Club which rewound you to the beginning of pop music.

More importantly, the people. This, at last, was an indie crowd,2 and it had a pleasingly even composition of students and locals. It was a place where I could find enough people like me to feel a sense of belonging, and enough people less like me to learn from and grow a bit. It was where I started to become part of a community, through the buzz of gossip and guitars. Three or four years later, when I started a band, it was the Flapper that would become our home turf.3 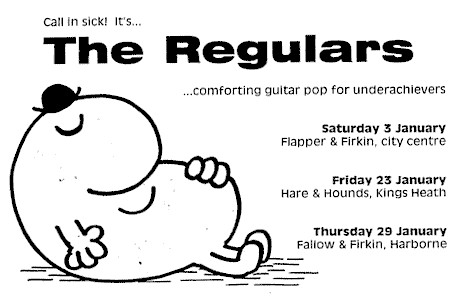 A flyer for some early Regulars gigs, created using a photocopier, some sellotape and Windows 95

Just up the steps and over the way, Broad Street continued to glimmer and fume, glowering Thatcherite narcissism unravelling to its logical endpoint of gridlock, fisticuffs, rope-barriered VIP entrances and vomit. By the standards of that cultural mainstream, The Regulars ‘achieved’ little. We released two singles on a local label and played a few small venues quite a lot of times. But the very existence of the band was an act of resistance against that ruined post-industrial logic. Down in the Flapper, a couple of streets away, we played songs which tried to put forward a different way of looking and living. And at our best – just occasionally, and in our small way – we flicked on a few lights.

The Flapper was where our small but quite devoted group of fans would turn out in good number and find us on our best and most exuberant form. They understood why those songs had to exist. They invaded the stage to dance between us while we played them. They took us afterwards to their parties, all tragedy, beauty and vodka. They wore masks with the face of our bass player Stu on the night he left the band. For reasons I never quite fathomed, they called themselves the Irregulars and turned out with cigarette holders and velvet dresses to look like Audrey Hepburn.

To apply the criteria of the market on a personal level, even to your job or career, is a misguided act. To apply them to the creative and the hedonistic is to ingest poison. Liberate yourself from those criteria and work to your own definition of success. Mine was making music for a few dozen young people who found themselves rudderless and browbeaten in a bewildering time and place. 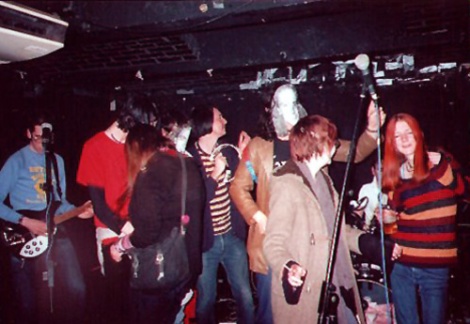 Stage invasion at the Flapper, with me in the middle still trying to play tambourine

Regardless of success, both the forms and the sites of creative/hedonistic resistance are temporary. Bands break up and venues fall to developers. Everything, in fact, is temporary. A month or so ago, the same day I heard that the Flapper was on its way out, Birmingham City University closed the doors on its Perry Barr campus, relocating its faculties to leafier Edgbaston.

In a few days’ time I’ll be playing a solo set back on stage at the Flapper. It will be my last ever appearance there, and my first since The Regulars split up in 2002. I’m quietly devastated that it’s closing, but I’m pleasantly surprised it’s lasted this long,4 and I’m glad to have the chance to say goodbye.

After the wrecking ball has done its work and the site is overtaken by high-achieving team leaders in prestigious waterfront apartments, the Flapper will persist in memory and anecdote. I’ll be there again and again, stumbling down those steps at the end of my freshman year, a rare grin breaking out across my face in the sudden joy of belonging.

And I’ll be cherishing our little group of glitter-swirling Regulars fans. When the band began, I didn’t know who my songs were for. By the end I was writing with our followers in mind and because I wanted them to be OK. So if we inspired them, they inspired us. And they’ll always inspire me whenever I think back. 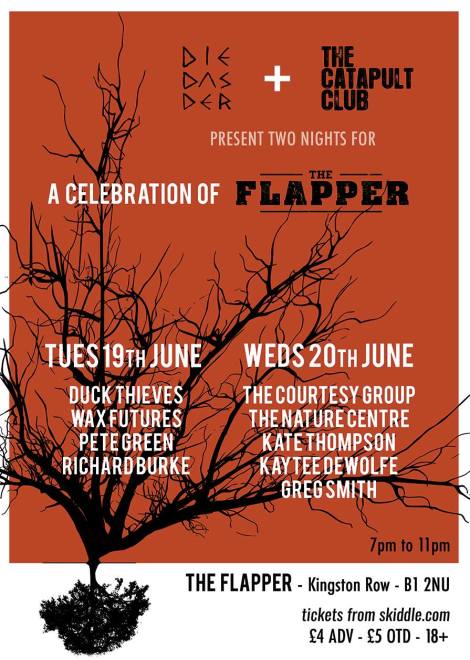 1. For several years the Flapper was part of the ‘Firkin’ chain, which rebranded dozens of pubs across the UK and then abruptly disappeared. Its two house tipples were a pale session beer called Flapper and a stronger ale called Dogbolter. They were simultaneously not very good and the best beer in Birmingham.

2. In this blogpost I am using the term ‘indie’ in its broad sense and not to refer specifically to indiepop, which became dormant in the UK during the mid to late 1990s and was practically extinct in Birmingham.

3. The Regulars were merely one band in a community of like-minded and mutually supportive musicians. There are too many to mention here but many of our labelmates on Bearos Records were at the hub. The best-known alumnus of this scene today is probably Fyfe Dangerfield of Guillemots, whose vocal talent was obvious even as a gauche teenager leading his first band Senseless Prayer.

4. Other notable pubs and venues destroyed as part of Birmingham’s deathly corporate makeover include the Pot of Beer, a vast den of revelry close to Aston University; the Ship Ashore, seat of many excellent club nights; and the Jug of Ale in Moseley, the other significant gig venue on the city’s indie scene. 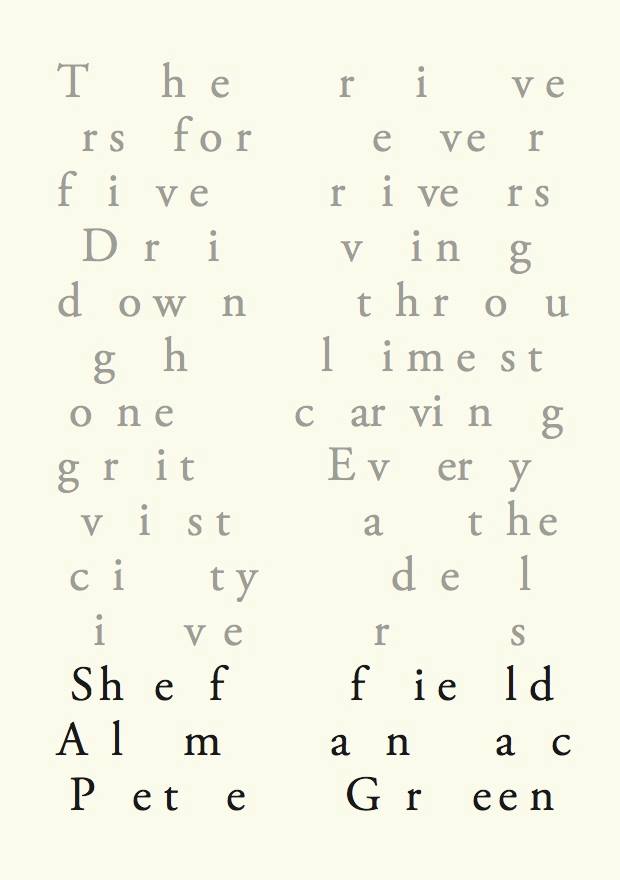