If we have to work, then everybody should have the right to fulfilling work. If that right is denied to most, then the system needs fixing.

I’ve been on strike about changes to the pension scheme that I joined at work – changes that jeopardise our chances of a comfortable and secure life when we’re too old to work any more. Being on strike is like Christmas. First, I’m worried about money. Second, I’m eating more cake than usual. Third, stepping off the treadmill frees up some time to give full and careful consideration to a few issues. Not least among these are work itself, and the alternatives to work, such as retirement.

When I’m at work I’ll do my job to the best of my ability (which generally means I do it well, because I’m good at it). Some aspects of it can occasionally be rewarding. I love my colleagues and I miss them when I’m away. But I don’t do it out of love. I’m not one of those people who would celebrate a million-pound lottery win and then go back to work because they don’t know how else to use their time.

Work in pre-industrial times was underpinned by a clear moral/pragmatic imperative. Where labour was necessary for survival but left undone, the whole community would suffer. The stigma attached to inactivity was a collective survival mechanism: the principles of Darwinism extending from the biological to the sociological. In the developed world today, however, most work is obviously unnecessary for the well-being of society. Logistically we have long moved on. Morally, however, we remain wedded to the atavistic belief that you don’t deserve to eat unless you are breaking your back.

This discrepancy manifests in some peculiar fault lines in the ethical landscape of Western society. Jobs are contrived for their own sake, however unnecessary or undesirable. Despite the technological automation of tasks, more people are working in the UK than ever before – in awful jobs, under oppressive conditions, for poverty wages. Unemployment benefit claimants are routinely demonised as lazy, even if they’re looking for jobs. Conversely, we’re perfectly happy for other people to opt out of work despite being capable of doing a job: able-bodied pensioners, inheritors of private wealth, and those lottery millionaires. We complain that we work too much, but we’re not remotely prepared to support the sort of change needed for us to work less. None of the UK’s major political parties yet feel able to advocate a universal basic income or even a 35-hour week.

I think we’ll get past all this eventually. But for now we’re undergoing a mass cognitive dissonance about work and it’s literally killing us.

A poem about work, which I wrote for the strike. Illustration: Ollie Hayes

Loving what you do

The defiant camaraderie of the strike is exhilarating for us all. I’m especially enjoying the exuberant pickets around the School of English, where I know a few members of staff (as well as some students and recent graduates). There’s fancy dress, themed around literary figures, and there are placards making witty cultural studies references. There is music and dancing. But in the end the academics (who comprise a majority of those on strike) would sooner be doing the teaching and research that they’re paid for. Despite the increasingly onerous demands of their jobs, they enjoy what they do. They’ve found a way to make a living from the thing they love.

I envy the academics this. But I don’t begrudge them it. That’s not how this works. I’m glad they have fulfilling work, because I like them, and because we all should.

One particularly shoddy counterargument against the strike, and all strikes, is that worse conditions have already been imposed on other workers. It’s a line beloved of the ruling class and commonly propagated by their servants in the right-wing media. If you don’t have that thing, why should they have it? But if they don’t either, you never will. Set down a benchmark, and other workers have a standard to aspire towards. This does not begin as a zero-sum game. It becomes one only if resentment outweighs solidarity.

The strike is going well. The employers’ side began by saying their changes to the pension were a done deal and there would be no negotiation. Then the strike began, and there was negotiation. This is because we gained the upper hand on two fronts. As well as the practical battle – causing disruption through the withdrawal of labour – we quickly came to be winning the argument. Many of the union’s rank and file members applied their analytical skills to the rationale and the consultation process for the changes to the pension. They revealed serious flaws in both and the ground collapsed below the employers’ feet.

A key point of contention is the proposal to switch the pension scheme from a defined benefit to a defined contribution basis (stay with me). It’s estimated that, should the original proposals have gone through, the average academic would have been around £10,000 a year worse off in retirement. Do I understand the difference between defined contribution and defined benefit? Sort of, although probably not well enough to explain it to someone else. Does it matter? No. Because there are people out there who do and whose judgement I trust, and their expertise is good enough for me. And because when your union asks you to strike, you strike.

I speak from little first-hand experience of industrial disputes, but it seems to me that if you start applying what-abouts and only-ifs, then the threads of unconditional faith that constitute the fabric of the union start to unravel. Selective solidarity is an oxymoron. The collective is everything, and belief even more than that. It’s like continuing to support your football team when they are manifestly terrible, or continuing to write poetry when Donald Trump wins an election. Or it’s like fire-walking. The moment you begin to question, all meaning and validity are lost, and you get burnt. Unreserved commitment is not an important aspect: it’s the entire point.

Being on strike has already cost me half a month’s pay, and it may yet prove necessary to walk out again. There’s been much to enjoy, though, about this temporary liberation from the office. I’ve got some writing finished, and there’s been time to cook proper meals instead of ovening frozen rubbish. I have, apparently, been more agreeable company around the house. It’s a glimpse of the more balanced life I might have configured for myself (given the confidence and security that are prerequisite to the somewhat privileged concept of ‘life choices’). I expected this. But I didn’t foresee the many wonderful things resulting from the action on a more social, collective scale. 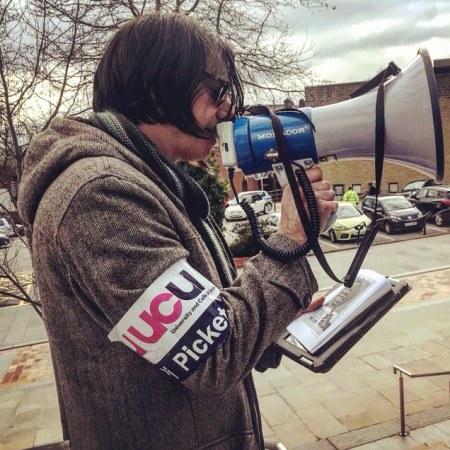 The editors of Cicatrice, a journal of creative writing, have compiled a pamphlet of ‘picket poetry’ to raise money for the union’s fighting fund and organised pop-up megaphone-powered readings on campus. I’ve chatted with colleagues from across the university whose paths I might never otherwise have crossed – linguists, philosophers, mathematicians – and as a result of one encounter I’ve started to look out for the results of Neuchâtel Xamax FC in the Swiss second division. I’ve enjoyed chocolate brownies baked by a PhD student who has regularly travelled from his home in Stockport to stand with us on the picket lines. I’ve faced down sudden heavy snow to keep the picket going, recovering by drinking a pint of stout at half past 11 in the morning and not feeling guilty in the slightest.

When I go back to work after the initial period of strike action ends, a job is being advertised in the School of English. It’s the same as the job I do now, but for two and a half days a week instead of four. On the one hand this would give me more time to write poetry, and writing poetry seems to be my final chance not to waste a life. Furthermore, I’d be working in a department I strongly identify with. On the other, of course, it would mean having substantially less money – both immediately and when I retire. I will have to give some thought to this trade-off. Perhaps I already know where I’ll come down.

In the end we will win the strike and the short-term loss of salary will prove a price worth paying. I have watched picket lines crossed by people who will benefit directly from the sacrifice made by their striking colleagues but who are unprepared to make any such sacrifice themselves. Their counterparts in the large-scale industrial disputes of the past, before the end of the Great Miners’ Strike, might have been verbally or even physically abused. We smile and wish them good morning. Some engage with us; some hurry through, avoiding eye contact, and decline even to return our greetings.

The win will prove more significant for them, in fact, than for me. My pay grade is substantially lower than those of the academics, even before factoring in my part-time hours. After the mortgage, bills, nursery fees, train tickets, whisky, moisturiser, guitar strings and jalapeños, I can afford to pay about eighty pounds a month into the pension scheme. I know this will be nowhere near enough to fund a comfortable retirement, whatever the basis of the pension scheme. Sometimes I consider this and the thought process follows a broadly similar track each time.

…so, what if I completely stop going to the pub and pay all that money into the pension instead… no, it probably still won’t be enough, and I’ll still retire without enough money and I’ll have needlessly denied myself the pleasure of three or four thousand visits to the pub over the past twenty years…

…and that’s if I even live that long, because I’m only five or six years off the age my dad was when he died… and white men in suits will just keep changing the rules and ruining everything anyway, because they always do… retirement at 65 becomes 68, then it’ll be 72, then an ever-receding and never-attainable goal… so in all likelihood, everything deferred is lost…

…so tonight I’ll go to the pub and try to forget all about this, to live for today rather than 2042… but first, on my way home, I’ll walk over the university roundabout, because everyone drives to work and they say the air pollution is bad enough to shorten your life… and that way, I won’t have to worry…